With indigenous round 7 this Sunday was an opportunity for the boys (and parents alike) to reflect on the challenges that indigenous people of Australia face.

With the start of the 1st Quarter the Roys were fantastic out of the middle with setups to Jacob Day, Jai and passages of play from Oscar Allen to Mischa Thackray.  The Roys were teaming well, in spite of spirited defense, from the Preston Bullants.  The big learning was to set up a little kick in front of goal to the best player in position.  Rather than kicking to packs the Roys extended there lead by looking for a free player

The second quarter displayed some quality passages of play with Willem out of the middle to Tom Dolkas, to Leo with great running though by Tom again.  Highlights of the quarter included some quality centre work by Harry Broderick and fantastic marks by Alex Carberry and Torren Arthur.  With Lloyd Fitzgerald under pressure in the backline the Roys were able to demonstrate solid defence in the backline.

At the third quarter Mischa Thackray quickly got the ball out of the centre to Leo with a quality goal Samuel Rusjan.  After watching the Richmond Essendon game at the MCG on Saturday night, Dash Spencer-White was eager to show what a win for the Roys would look like.  With tough contest out of the middle Dash quickly got the ball to the Roys forward line with three different plays.  Other stand-outs for the quarter included Felix, Archie, Dash..again and solid defence by Finlay and Oscar.

With fantastic tackling and teamwork in the third quarter.  The fourth quarter started with some fantastic offensive pressure that was defended by Jacob Day and Christopher Barnes.  The Roys then continued with more of the ball in the forward line with Mischa to Barnaby and Mischa again to Sam Rusjan in front of goal.  In one display of teamwork there were 7 passes (Jacob, Harry, Thomas, Harry, Archie to Oscar) before ultimately scoring a goal for the Roys.

In celebrating the Indigenous Round standouts for the day were Archie, Leo and Alex Carberry.  In the spirit of the indigenous round, the medal went to Archie Noakes who played a great game and encouraged his teammates, gave off plenty of handballs, used the ball really well, used his voice really well, and did a lot of things that the coaches have been asking him to do.  Well done Archie! 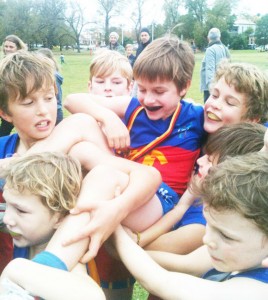