On a sunny Sunday morning the Roys came up against the Brunswick Dragons for a special Mothers day match.  With many friends who were part of Auskick now forming the Brunswick side, the game had special significance for both the Brunswick boys and the Roys alike.  The Roys kicked to the City end of the Alfred Crescent oval, for the first quarter, with great defense by Lloyd Fitzgerald which continued to move the ball into the Roys forward line.  With strong and spirited defense by Brunswick the Roys were able to pepper the forward line leading to many opportunities at goal.  Another highlight of the quarter was Oscar ‘fast-twitch’ Allen who ran, dodged and weaved his way through many packs to pass to ball to Kai Hughes into the goal square.  Other highlights included spirited defence by Josh Hornsby and Willem van den Enden disposing of a ‘hot ball’ with great skill to Leo Sekhon and Barnaby Williams.

With the second quarter underway, the Roys were out of the blocks in record time and kicking with the wind.  Out of the middle of the ground, great crumbing and defensive work by Dash Spencer-White and Barnaby quickly got the ball to the Roys forward half.  The Roys showed great courage with running passes translating to many opportunities at goal.  At half time a big focus for the rest of the game was a finding the best option in front of goal so that each kick converts to a scoring opportunity for the Roys. 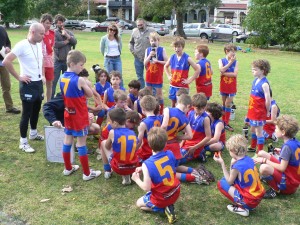 The 3rd quarter of the mothers day match started with the Roys kicking into the wind.  The Roys worked the ball out of the middle from Finlay with a stunning kick to Torren Arthur, which translated to fantastic teamwork in front of the goals. In the next passage of play stand-outs were Kai Hughes, Christopher Barnes and Mischa Thackray which again translated to fantastic results for the Roys. With a few minutes to go after numerous tussles out of the middle Joshua Mercuri took a fantastic mark in front of goal.

The 4th quarter was another display of the great skills of the Fitzroy Tackers U10s.  Out of the top of the square a great kick by Lloyd Fitzgerald quickly delivered the ball to the Roys forward half…again.  Out of the middle, in the next passage of play, Harry Broderick showed great defensive skills getting the ball to Finlay Park, to Lloyd Fitzgerald, to Joshua Mercuri to finally to Leo Sekhon who converted again for the Roys.  The fast, high speed Roys style was on fine display with further dispatches by Torren Arthur and Christopher Barnes.

After congratulating the Brunswick Dragons on a great game, the Roys regrouped to sing the team song.  The coaches, Cam and Hamish congratulated the boys on their improving passages of play and great passing to find the best option in front of goal. 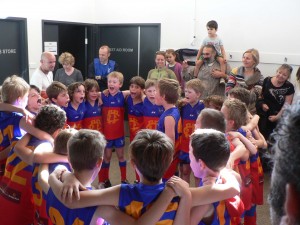 With a 3 cheers to all the mums who joined us on the day the boys look forward to the Tacker Round robin next week at Bulleen Road.