What is a Coach?

Dictionary.com defines a coach as “a person who trains an athlete or a team of athletes”. Fair enough. That’s certainly part of the story. But a football coach has other responsibilities as well – tactician, motivator, disciplinarian, mentor, confidant, manager, organiser, to name a few. A junior football coach probably has a few more – teacher, parental figure, role model. This list could go on and on, especially when all the extra responsibilities that working in a volunteer organisation get added in – first aid officer, bottle washer, equipment monitor, groundsman, organiser of parents – the list gets bigger and bigger. Hopefully, in the FJFC/YJFL environment a few of these roles get taken care of by your Team Manager. But there is still plenty to think about.

Make Sure they all come back again next year

Perhaps the primary role of the junior coach is to ensure the players learn about the game, develop as footballers and enjoy themselves. Our primary motivation must always be to get the players to stay in the game – kids give up sports for a variety of reasons, but every coach must strive to make sure that the way he or she coaches is not one of them. Technical Director of Football (Soccer) Australia Han Berger was quoted in “The Age” on 30/1/2011 saying that “…only when they (the players) are in their mid-teens should they worry about winning matches and competitions, and bother themselves about whether their best career prospects lie in developing specialist skills as a defender, midfielder or (forward). Skill Acquisition is the most important thing…”. These ideas apply equally to our code – individual development (ie development of all the individuals in your team) is what junior coaching is really all about. Sure everyone likes to win, but the coach sets the tone for all the kids in their team – too much focus on results can mean some kids, especially the “strugglers”, find themselves starved of opportunities. If all they get is a couple of quarters in a pocket it wont be long before they ask themselves why they bother.

Kids of all ages need encouragement to produce their best. Positive reinforcement, praise, barracking – call it whatever you like, the coach must be relentlessly positive whenever they address the team. You might have just thrown away a match winning lead in a crucial game, but is yelling at the kids going to change the result? Focus on the positive – how did we get that far in front? Most crucially, NEVER single out a player for criticism in front of the group. Young egos don’t cope well with that sort of humiliation. A quiet word later, one-on-one, is the time to point out areas for improvement. If you really feel that the group has under-performed, don’t go into a rant about not looking for your teammates, ask the kids “what can we do better next time”, “have we executed our skills properly”. They’ll know what’s been lacking, and they’ll feel much better about it if you give them the opportunity to find the answers.

So the coach has plenty to think about, both at training and on match day. Some people can cope with lots of concepts at the same time – running a drill, dealing with an undone bootlace, letting a little brother join in, a parent who wants a “short chat” about their child’s position in the team, water bottles that need filling, dogs running across the ground, etc, etc, etc. Most can’t, at least not without two things: a few willing helpers and having some sort of plan for the session / game / address.

These days the best coaches in the game, those in the AFL, have an assistant for each “line”, an opposition analyst, a few stats recorders, player welfare officers, development coaches – almost as many coaches as players. At FJFC, we don’t have all that, and few would argue that we need them. But every coach at least needs an assistant to lean on and a few parents to move the witch’s hats or catch a few handballs at training. At the very least, managing two dozen excited small kids requires eyes in the back of your head – if you don’t have these, an assistant is really vital. Someone who can tap you on the shoulder and suggest that you might want to check why you have three half back flanks on the ground – because sometimes it’s easy to lose track of a few of the details. At training, anyone can help – even it just someone to make sure the kids can safely get to the toilets – otherwise it’s you has to bear that responsibility. 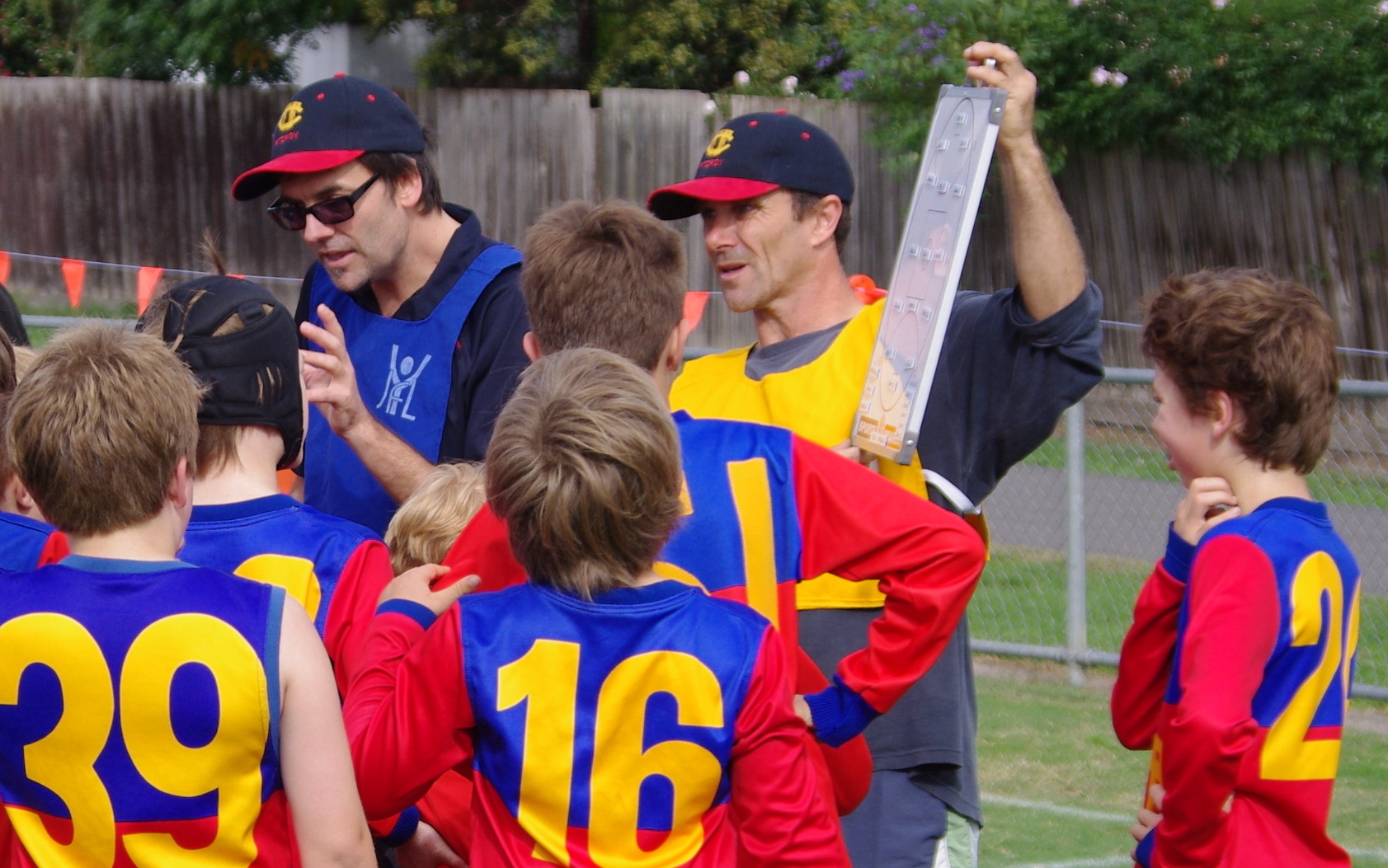 Here’s a wonderful cliche, but one that couldn’t be more true for a junior coach “Failing to plan is planning to  fail.” You might be the sort of person that can sum up all the tactical, medical, developmental and managerial issues quickly in your head and make quick, successful decisions in the heat of the moment. Most of us aren’t, and thereforewe need to cheat a bit and make some of these decisions in advance. If you’re going to rotate players on and off the bench, have a line-up for each part of the game prepared in advance. If you are approaching an important game, think through what might go wrong and prepare a few options – my ruckman’s getting thrashed – who else can go in there, and can the ruckman fill in that kid’s position? The centre half forward gets injured – who else can lead and mark? If you haven’t thought through some of these questions in advance, are you really going to make the best decision during the game with everything else going on around you? In the section below on Tools you will find spreadsheets that help with rotations, with keeping track of game time in different parts of the ground, of games played and goals kicked and others useful information. Some may think it’s a bit over the top to record all this information for a junior footy team. Others might wonder why there aren’t more stats charts.

Do it Your Own Way

Everyone has there own way of coaching, and it’s often said of coaches that they must make their own mistakes, not someone elses. This is very true – there is no point trying to impress everyone around your team – tell everyone at the start of the season how you plan to go about it and then coach your way. Listen to advice, especially from those whose opinions you respect, but then make your own decisions – you’re the one who volunteers for this job and puts in the time – if other pepole think they can do better, let them try it next season. The tools available on this site (and if you have one that’s not here that you reckon others could use, let us know) might help you do the job better, they may not. But they have all been used by earlier FJFC coaches who got something from them, so they could well be worth a try.

Above all, make sure you are enjoying your time as a coach. If you’re not, then the players probably aren’t either. Coaching a junior team inevitably has it moments of frustration, but it can also be inspiring, heart-lifting, exciting, fulfilling and create great friendships. And remember, every week at training there will be a couple of dozen kids who are just itching to have a kick of the footy with you – and how much fun is that!